skip to main | skip to sidebar

This sounds pretty funny.
Posted by Jay at 3:03 PM No comments: 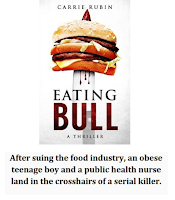 Quickie Recap: An overweight teenager becomes the poster boy for obesity in a lawsuit against the food industry while a fat-obsessed serial killer is on the loose and racking up a hefty body count.

Quickie Review: Author Carrie Rubin has a voice that's clear and clever. Her characters are well-drawn and sympathetic. Her real-life background in medicine lends authenticity to the narrative. This is a cause she is clearly passionate about, and compassionate about.

Quickie Recommendation: It's a great medical thriller that'll put you through your paces and leave you gasping at the end. A page-turner that's sure to please any reader...but not to be read while eating dinner. ;)

All are welcome to enter to win a free copy here - now until December 15th.
Posted by Jay at 7:50 PM 1 comment:

Quickie Recap: 5 year-old Jack is being held captive with his Ma in a tiny space he calls Room. He has no concept of the outside world as he's never seen it. But when their captor loses his job, putting his ability to support Room in jeopardy, Ma realizes they need to get out, or be killed. She fakes Jack's death and relies on her 5 year old son to escape, and bring help, and unbelievably, he does.

Quickie Review: It feels a little like a spoiler to have written what I already have, but it's not. That's just the basic premise. It's what comes after their escape that makes up the meat of this book, and also what makes it stand out. It's not so much about victimhood as rehabilitation - it's very hard to readapt to the world if you didn't even know the world existed. Emma Donoghue is an excellent writer who miraculously manages to avoid the maudlin sentimentality and comes up with a taut and smart story about survival, and about a unique mother-son bond that will make you feel all the feels.

Quickie Recommendation: A definite favourite, I cannot recommend it enough. And I'm happy also to report nothing but love for the film adaptation starring Brie Larson. Read the book, then watch the movie, then tell a friend.
Posted by Jay at 1:18 PM No comments:

Quickie Recap: In the not too distant future, the world will have no more bees, and with the bees go lots of our favourite crops. Five years after the extinction, 5 seemingly unconnected individuals are stung all over the world, and in rush the scientists to study them while they blow up all over social media. 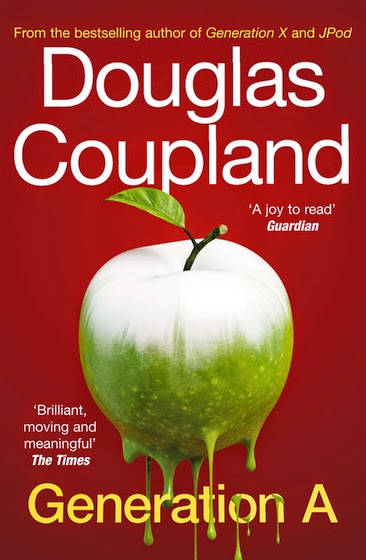 Quickie Review: Told from a shifting-frame perspective, each of the group of 5 gets their chance to narrate and bring their own views and unique voice to the novel. This style is supposed to mimic Coupland's most famous novel, Generation X. I liked this book, although I read it warily. As usual, Coupland explores the meet and greet between culture and media\technology. His protagonists are all slackers, all disaffected youth, and all seem to be up for this non-voluntary adventure their bee stings have obligated. They're also living in a time when heroin addiction is null because of course, poppies require bees. A new drug, called Solon, has stepped in to replace it and everyone's attracted to it - except for these five. Released from their experimentation cells, they have a new prison: celebrity. To escape, they are herded by a charismatic scientist named Serge onto a remote Canadian island where they are encouraged to tell stories. These stories end up revealing things about their raconteurs of course, but also about who they are becoming, isolated together on the island. The stories, unfortunately, take the place of plot, and the book kind of falls apart in the second half, and Douglas struggles to regain control so that he may grant us the ending we deserve.

Quickie Recommendation: I wish we had learned more about this world without bees. The stories did very little for me. I missed action, I missed movement in the story. I'd still say check it out, but it doesn't stand up to his previous great works.
Posted by Jay at 1:28 PM No comments:

Quickie Recap: Astronaut Mark Watney is left behind on a Mars mission and now faces the physical and psychological challenge of bleek, lonely, long-term survival until the next mission, 4 impossible years away, may return to save him. 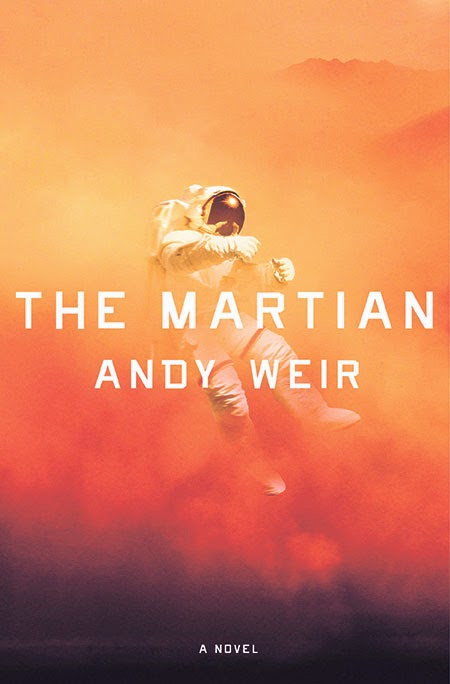 Quickie Review: This book heavy on technical detail. Watney writes mission logs highlighting the challenges that each day presents, his problem-solving, and the outcome. Although the technology is light-years over my head, I still enjoyed reading these parts, and though I can't verify the sciences, it certainly sounds plausible, like Weir must have spent an exhaustive amount of time on research. His imagination doesn't fail us either, and I particularly enjoyed Watney's brand of wit. Weir does a great job of balancing the desolation with humour.

Quickie Recommendation: One of the more enjoyable reads I've had all year. Although I can see that the science-heavy jargon may not be for everyone, I still find it accessible to a general audience and I'm eagerly awaiting something else from this promising new author.

A True Story of Vengeance and Survival


Quickie Recap: A literal man-eating tiger is stalking a village and they've called in the big guns to get rid of it before it can make another meal of human meat. This tiger is not just any man-eating tiger - it has a beef with these people, and it seems pretty intent on making good on its grudge.


Quickie Review: Interesting fact about tigers? Once they eat human flesh, they can't get enough of it. Oh yeah, you'll learn stuff while reading this book. Actual stuff. This book conveys a real sense of hunting and being hunted; the hair on the back of your neck will not get a rest for days.


Quickie Recommendation: Depends on what your gore factor is. If you have the stomach for it, go for it.
Posted by Jay at 10:37 AM No comments:

So here I am, reviewing books again.
It's been two and a half years, which probably means over 500 missed titles while I've been gone, some good, some bad, some forgettable.

Actually, looking through some of my old posts I'm surprised at myself - how some of the ones I seem to have loved the most have faded from memory while some of the stinkers are still in my head, taking up space. Interesting how that works out.

I cannot remember a single day of my adult life that I did not read. At the very least, it's how each day ends: whatever book is on my night stand gets as many pages read as possible before my eyes start to flutter. Books are also my companion in my almost-daily baths, a quiet time of luxury and escape into a world of words that I can never get enough of.

I find that I have missed having a record of what I've read, and also missed being able to share the truly good ones with people who might appreciate them. Even more, I've missed my fellow readers helping to shape my shopping list, and passing me THEIR stellar recommendations. There aren't enough book lovers in my circle of friends, there aren't enough in the world, and I suppose I crave having this little niche available to me when I need to rave or rant about something I've lovingly placed on my shelf, or angrily thrown out the window.
Posted by Jay at 8:24 AM No comments:

Jay
Ottawa, Ontario, Canada
I have a clear conscience because I have a bad memory. The martinis help.